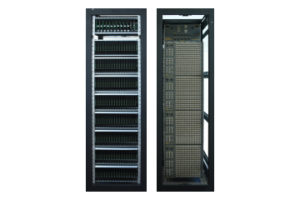 Matrix Switch Corporation Now has an extensive family of medium to very large analog video routing switchers. Known as our XLV series. Where X is the control system family set of features. L for Large and V is the term for analog video. Sizes span 128×128 up to 2048×1024. The signal path in the XLV systems is based on a front of frame plug in 32×32, 200MHz crosspoint module. Including a dedicated microcontroller on each card.

The XLV ‘Crosslink’ technology eliminates the performance degrading input buffers and output combiners required in conventional XY ‘two dimensional’ designs. Crosslink connects every 32×32 module to all of the other 32×32 modules in a distributed interconnect fashion, similar to a ‘Clos’ system. The key differences are:

• Repeating input to multiple destinations is allowed, without disrupting any other paths in the system.

• All ‘stages’ of the system are identical

Input – Output selections via RS232 or Ethernet Web GUI ports appears to the user as a conventional two dimension path search. Inside the XLV system proprietary path optimization software finds the ideal path without disturbing any other path combinations.

All XLV systems include redundant power supplies and redundant controllers.

Contact Us for more information, to inquire about custom sizes, or to ask about support for third party control.